Compute Studio 1.6 represents a huge step towards accomplishing two goals that Matt Jensen and I set for Compute Studio at the beginning of the project. First, we want to make it easy to publish and update models on Compute Studio. Second, we want to efficiently use compute resources while at the same time making sure that users get their results as quickly as possible. This release reduces a significant amount of friction in the model publishing process and opens a clear path for completely automating model publishing. Further, this release drastically reduces C/S server costs while increasing the amount of compute available to the models. Throughout the development of this release, we worked to shore up other parts of the C/S infrastructure. These improvements include more secure secrets management, more isolated model environments, enhanced deployment tooling, and more. The end result vastly improves the current performance of the C/S compute cluster and makes way for future improvements. Thank you to everyone who contributed to this release!

Read on to learn more about what went into C/S 1.6. Or, if you just want to see the code without the long-winded release notes, you can find it in the workers package and the compute-studio-publish repo.

If you like what we are doing, check out the C/S premium plans. This is how we fund our server costs and pay my salary as the primary technical developer.

Before getting into the technical details of this release, I just want to say that this was a really fun release. The problems that we tackled are challenging, and they forced the C/S team to think through and try several different solutions before figuring out what worked.

The crucial insight for automating the publish and update process was that this is really a CI/CD problem. This insight made it clear that we shouldn't build our own tech from scratch, and that we should use GitHub (or another git service like GitLab) as the interface to our CI/CD service. There are several reasons for this:

I chose GitHub Actions because it didn't require me to set up other services outside of GitHub. It has predefined flows for doing things like building and publishing Docker images and deploying to a Kubernetes cluster. This made it easy to cobble together several existing configuration files to accomplish the flow that we needed. I also explored Microsoft's Azure Pipelines. Pipelines offers an easy, seamless integration with GitHub; however, it didn't add any additional features relevant to our flow that warranted adding another service to C/S's already complicated technology stack. As an aside, I was disappointed that none of the CI/CD services except for AWS's offering have a hosted service with configurable compute resources like number of CPUs and amount of RAM. I would happily pay for this feature if it was available.

Next, I began setting up a git-based flow for publishing and updating models. I created the compute-studio-publish repository to serve as the home of the CI/CD service. This separates C/S development from the chatter of model updates. The compute-studio-publish repo has a configuration file for each public model on C/S located at config/:owner/:title.yaml. An update is triggered when a PR is opened with the model's modified file. Currently, I manually start the update process when I get an automated email notification after a model update on C/S or if a model maintainer asks for an update. In the future, this step will be triggered by a model maintainer from the C/S GUI or REST API. 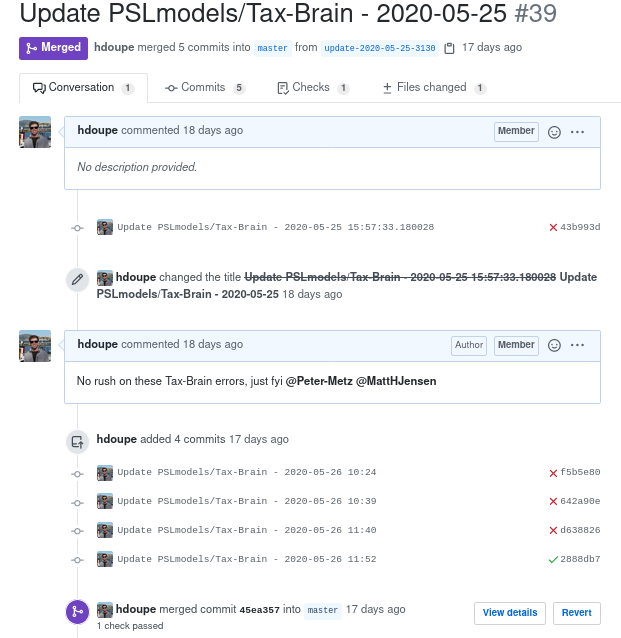 Making progress on C/S's goal of automatically publishing models came easily once I realized that this was actually a well-known and very solved problem. After that, the implementation was a matter of tying together various existing services and automating the build/test/deploy steps. Making progress on C/S's scalability problem did not come this easily--it was a year long grind. In the early days of C/S, the models were run on a single Digital Ocean server using docker-compose. Jobs were submitted to the cluster through a Flask API, and the jobs were run by Celery workers. Eventually, I moved the configuration from docker-compose to docker swarm and finally to Kubernetes on Google Cloud Platform (GCP). The move to Kubernetes and GCP made it easier to set up autoscaling rules based on CPU usage for each model's celery workers. This improved C/S's scalability, but it made the compute costs way too high. The reason for the high costs was that each model had to have at least one celery worker running at all times, resulting in a lot of idle servers.

The first attempt at fixing this problem was to use Dask and its Kubernetes support to scale compute. We added Dask cluster support as a beta-level feature, but soon discovered that submitting more than two or three simulations at once caused a scheduling traffic jam. Each simulation had several long-running tasks, and each of these tasks held onto one of a Dask worker's threads. Eventually, there wasn't anywhere to schedule sub-tasks and all of the simulations would stall until more workers could be added to the cluster. Next, Matt Jensen and I spent some time exploring projects that were more in the ETL space like Apache Airflow and Prefect. Apache Airflow seemed like a great solution, and in particular, its Kubernetes support looked like it would offer exactly what we needed. However, Airflow seemed to be geared more towards data-science jobs that are scheduled to run on a regular basis and not jobs that need to be run on-demand. Prefect seemed like an evolution from our initial approach of using Dask to schedule jobs, but it felt a little too new for us to base our long-term infrastructure on. Finally, I decided to give Kuberenetes Jobs a try. Throughout this process, I kept coming back to the Jobs documentation page and wondering if this is what we needed. So, one day I fired up a Kubernetes Job using Tax-Cruncher, and the Job quickly came on-line and ran successfully.

After this mini-experiment, I wrote a Python Job class to wrap interactions with Kuberenetes configuration and began integrating this into the compute cluster. The early version of this class required the model's owner and title, which Docker image tag to use to run the job, and the simulation inputs:

Some advantages that we got for free just by swapping from Celery to Kubernetes Jobs are:

The one headache was that the pods created by Kuberenetes Jobs are not cleaned up automatically. There is an alpha-level feature called ttlSecondsAfterFinished but most cloud providers will not let you use alpha-level features in a managed Kubernetes cluster. To work around this, I set up a Kubernetes CronJob to clean up any pods that completed successfully:

The new approach of using Kubernetes Jobs has been in production for about two weeks now and has been running smoothly. Our costs have been reduced by about 50%, and we can add as many models as we want without incurring any additional financial costs. I'm excited to see how this solution performs as Compute Studio scales up with more models and more users.

Since this release turned into a full-scale re-write of the compute cluster, I tried to fix some of the problems that were neglected in the first implementation:

As exciting as this release is for the C/S team, I'm more excited for the features that we will be able to add next. I'm thinking about completely automated publishing and deploys, enabling model maintainers to manage their own secrets from the GUI, enabling users to select which version of a model they want to use, adding different types of model deployments like interactive servers made with Dash, and the list goes on.

If you think this is cool, check out the workers package and let me know what you think. You can find me at [email protected] or just open an issue in the compute-studio repo.